On Fri-Apr-26 at Red Rock Coffee in Mountain View, Amelia Lin of Keep Life Stories gave a  short briefing on “Going from Zero to First Paid Customer in 12 Weeks ” 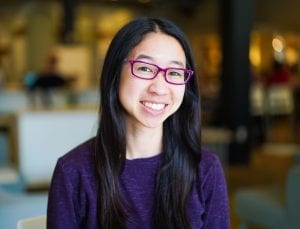 Amelia’s story: “When I started a service to capture a loved one’s life story on audio, I was coming from a completely different background in EdTech. I needed to know: Would people even want such a product? How much would they pay for it? Who were the right people to sell to? Why would they buy my thing instead of something else? …and I needed to learn all of this, very fast. Here’s my top lessons on how I sped up that learning feedback cycle and closed our first paid customer 12 weeks later, without writing any code.”

About the Bootstrapper: Before starting Keep Life Stories, Amelia Lin was a product manager at Udacity and worked at a range of Bay Area software startups. Keep Life Stories is a service to capture a loved one’s life story on audio, and came out of her own desire to have her parents’ stories recorded for family history.

Keep Life Stories is a service to record a loved one’s life story on audio. We send questions each week, they record by calling a special phone number (no app install needed!), and the audio is shared in a private family channel we create for you. It’s like getting a podcast of Grandma’s childhood stories.

I started working on it full time in mid-October, 2018. 2 weeks in, I had a beta running with testers on it. 12 weeks in, we got our first arms-length paid customer. Here’s my top lessons learned for how we got there:

Keep Life Stories is a service to record your loved one’s life story on audio. Our typical buyer is somebody who’s buying it for an aging parent or a grandparent to have their legacy saved for the children and grandchildren.

Here is how it works. We send questions every week, things like, “What was the biggest trouble you ever got into growing up?” We cover all the way from childhood to present day.

To record, they just call a special phone number that we’ve set up for them. No app install needed. Our oldest users are 95, right? This is very, very senior-friendly to use. Then the audio every week gets shared out to you, privately with the family. It’s like getting a podcast of your grandma’s childhood stories. That’s really what the experience is like.

Before this I was a full-time software product manager. I worked at Udacity as a software product manager. I’m not a coder, either. I left my job to work full-time on this in October of 2018. 12 weeks later was when we got our first paid customer. There were a lot of ups and downs in that time. But I do think there are some things that, looking back, I’m like I think that really helped us get that turnaround to sort of the first paid customer as quickly as we did.

I just wanted to find a way to make it a lot easier for them. Because asking, “Hey, Mom and Dad, can you write down your whole life story for me?” It’s just a huge chore for them. I wanted to make it really, really easy.

We Got the Absolute Hackiest Version Out

The first thing that I’m really glad that we did was we got the absolutely hackiest version out. I was able to get feedback on our product within the first two weeks because I wrote no code.

I strung everything together that I could find. To schedule an appointment we would use Calendly. Then I would send you this Google doc that had questions in it. Then I found this third-party service that let me post videos in a private player. Was it ugly? Yeah, sure, it was way uglier than what I had in mind. But just getting feedback from people as soon as possible, which was so valuable.

Anyway, I strung everything together without having to write any code myself.

Things We Learned as a Result

The first thing I learned was that you can get something out there without writing any code. You can start getting feedback immediately

The second thing that learned was that I had to read between the lines of the feedback that people were giving me, because it’s very rare that will people tell you straight-up what it is that they want or don’t want or what’s missing. You have to do a lot of interpretation.

For example: one of the early things that happened was a daughter got her Mom’s recordings and she said, “Wow, I have all these questions for Mom about what she said here. I just never heard all of this.”

She was sending me all these questions, and I thought: these are great questions. And I realized we should allow her to send these directly to her Mom. And that was how the social interaction and commenting ended up getting built into the product. Now, after each story, there’s usually a conversation that gets sparked between the family around each story, and that has made the whole product more engaging.

Initially we were delivering transcripts as the end product. Today we are focused on audio, because we started seeing more and more people asking for the audio to the transcript.

In a Crowded Space, it Doesn’t Hurt to Talk to Competitors

One thing I’m really glad that I did early on was to talk to a lot of competitors in the space. I talked to a lot of people who worked in this industry or had formerly worked in this industry. What I found was that when you’re so new, you just say up front, “Hey, I’m just getting started in this space. Any advice from your years of experience?” Nobody considers you a threat. You’re brand new, there’s nothing to be scared of for them.

If anything, they just feel like I want to help you out. “I remember when I started out, it was hard or whatever.” One of the things I learned from talking to people was, oh, at least 80% of the business in the space is from people buying for someone else. It’s not people buying for themselves.

One thing that I did for the first three months, every single conversation I was having, every social event, didn’t matter, I would tell people, “Hey, this is what I’m working on. Do you know anybody who has tried to do this for their own family? Or has worked in this space?”

I would follow up on every single one of those. I would also go to people’s websites and see if I could reach out to them. I would message people on LinkedIn. I’d go to their website and find some contact email.

At least for me, this is such a niche space that I think more often than not, people were just kind of pleased to hear somebody reaching out, being like, “Hey, I’m starting a business in this area.” It’s not like there’s so many of us who are working in this.

One woman I spoke to is a professional ghost writer for memoirs for families. She gave me a ton of advice. I asked her, I said, “How much do you think I should charge?” She said, “Well, I don’t roll out of bed for less than $20,000 per family.” She custom edits a book of memories for the family.

I Felt Reluctant to Ask for Money Early on, Because the Product Was so Hacky.

But I felt reluctant to ask for money early on, because the product was so hacky. It was literally just Google forms and docs and email. There was basically no code actually there. It was me manually doing everything. I also really struggled with pricing on this because it turns out there are lots of businesses in this space. It’s like this personal history sort of legacy preservation space. The existing businesses in the space are very, very concierge and very, very white glove service. We explored about five price points for a subscription service where you pay up front for a certain number of recordings.

One problem with how most of our competitors work today is you hire a professional interviewer, videographer, or ghostwriter and they disappear into a room with your Grandpa for three to 12 months and then finally at the end, you see this massive final product come out. We provide a recording in 24 hours and we normally see family members listening to it and commenting within 48 hours. And when Grandma sees that she gets excited and is looking forward to the next recording session.

2 thoughts on “Amelia Lin on Learning Fast: “Going from Zero to First Paid Customer in 12 Weeks “”